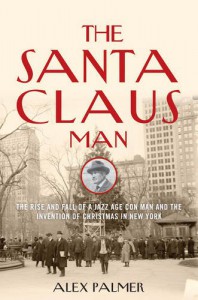 Far be it from me to be part of "Christmas creep"; I'm as nauseated as anyone to see holiday decorations dominating stores and Christmas-themed commercials cropping up on tv. But this book was published in, and I read it in, October, and – well, after all, this is how it all began…

I roll my eyes at sentimental movies. That part in the Two Towers film where the whole theatre was filled with the sound of sniffling found me sitting in a boiling fury at the ridiculous schmaltz of it all. I cry at Hallmark commercials, and cannot bear to watch an ASPCA commercial or listen to Kathy Mattea's "Where've You Been". I am basically a hard, cynical shell over a soft and squishy center, simultaneously all kinds of jaded and a huge ball of mush.

So is this book.

It is the tale of what is simultaneously one of the best and worst things, one of the the happiest and most cynicism-inspiring things, about the Yule season in modern times: Yes, Virginia, it's Santa Claus. Herein is the complete evolution of the jolly old elf, from skinny Dutch saint to corpulent reindeer-wrangler, and that's tremendous fun to follow. It’s sad to think that just about a hundred years ago no one would have dreamed of putting Christmas merchandise in a store in September… Can you imagine? No commercials targeting children (no commercials, period!), and no commercialization – Christmas treated as a family celebration. A religious holiday! Remarkable.

As a sidebar to the main story, The Santa Claus Man depicts the death of that mindset.

It also depicts the death (sorry: spoiler) of the United States Boy Scout. Not the Boy Scouts of America, mind you – they're alive and well. No, a hundred years ago there were two organizations, and the one you've probably never heard of, the one whose boys used to carry guns, the USBS was the one who became involved with the Santa Claus Association – and with whom John Duvall Gluck became more and more involved, leading to the downfall of all of the above.

It's a fascinating story, a portrait of New York City in the teens and 20's, of philanthropy and greed, of goodwill to all blended with casual racism, of propaganda and duplicity and heartfelt sentiment, the greatest wealth and the deepest poverty and the interaction between the two. It's an absolute validation for all the cynicism the most world-weary cynic can bring to bear … but there's also a fair amount to feel warm and fuzzy about. Funny old world, isn't it, where the two are so inseparable? The beginning of the story, as this one man decides to do something about all those children's letters to Santa Claus which landed in the dead letter office every year, actually brought a lump to my throat.

The end did too, but by then it was nausea.

Something that bothered me all through the book – due to that squishy center, I guess – was this sort of sentiment: “There are thousands of folk willing and anxious to help make the Yuletide happy for children". That's wonderful, I kept thinking, but – where are those thousands of folk the rest of the year? Isn't there a certain terrible irony to the idea that impoverished children might receive a toy they wished for – but not have enough blankets on their beds?

Gluck received a letter from the personal secretary of William Kissam Vanderbilt, inheritor of $55 million from his father, Grand Central Railroad owner William H. Vanderbilt. Gluck likely tore open the envelope with excitement, curious what the rich man might be offering the association. “Dear Sir,” read the letter. “Mr. Vanderbilt requests me to send you the enclosed check amounting to $10, his contribution towards your Santa Claus fund.”

This is a terrific read, very well-written and meticulously researched, never pulling a punch no matter whose relation Gluck was. But be warned: despite the title and the topic, this isn't really a cozy Yuletide read, not the sort I've always looked for to read by the light of the Christmas tree.

This was received from Netgalley for an honest review - thanks!