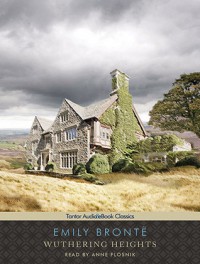 This is one of those classics I was never able to get very far into. The first time I got the whole gist of the story was watching the Olivier-Oberon film some time back, which surprised me with how much I disliked every single soul in the story.

Last year I finally got determined to crack the shell of this thing and listen to the audiobook. Heck, I thought, I listened to one of my most-hated-books-ever, Tess of the Durbervilles, and ended up appreciating it; surely it would work with Wuthering Heights.

Which is nothing against the narrator. Anne Flosnik was the only good thing about the experience: she was excellent.

But the book made me want to bang my head against a wall until it was over. I am glad I finally completed it. It's a good thing to have under my belt. But the one-word review I posted when I was done was, quite simply, "Phew". it was my expression of amazement at how awful it was - and, more, my relief at being through. Put it this way: there was a very high body count in this book – it was one grim death after another. But I didn't mind so much in WH because, as in the long-ago-seen movie, I hated every single character. They were either so weak that a mouse sneeze would knock them over, or strong in the way that a serial killing psychopath is strong. So there was me listening to the book thinking “Yes! Die! Die! Die!”

I honestly don't know if I've read and enjoyed a book where I've been unable to like anyone involved. And here it was beyond simply not liking anyone – this was a pulsating loathing. I don't know if I'd be able to like this one even if some of the characters were more amiable – there was another big factor in my loathing of this book: the utterly impenetrable dialect. Now, I can usually manage accents, especially British accents of all types. I love 'em. But my lord. A random sample that I pulled out: 'Ony books that yah leave, I shall tak' into th' hahse,' said Joseph, 'and it'll be mitch if yah find 'em agean; soa, yah may plase yerseln!' On paper, I can read that without such a problem. Aloud? It might as well have been Bantu.

Kind of thought it might be now and then.

But no. Hateful characters and impenetrable accents aside, this thing was just so unremittingly bleak, so grim and ugly … Heathcliff hanged Isabella’s dog. As a warning. And now if someone could explain to me why he’s considered (from Wikipedia): “an archetype of the tortured romantic hero”...

There is more to the word “romantic” than the common usage. I know that. What frightens me is the people who don’t know that, and still call Heathcliff a romantic hero. I would as soon call Ted Bundy a romantic hero.